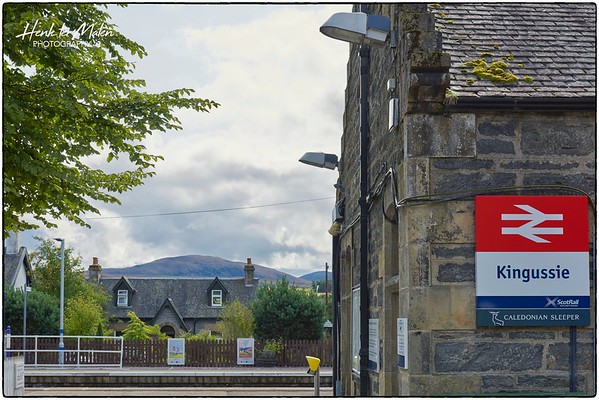 The Inverness and Perth Junction Railway (I&PJ) was authorised in 1861 for a line between Forres and Dunkeld.[2] It was built quickly, and was opened in sections; the last stretch, that between Aviemore and Pitlochry, was opened on 9 September 1863; and one of the original stations was that at Kingussie.[3][4] The current station buildings date from 1893 by the architect William Roberts.[5]

The I&PJ amalgamated with other railways to form the Highland Railway (HR) in 1865,[6] and at the 1923 Grouping the HR became part of the newly formed London, Midland and Scottish Railway.[7] The adjacent stations were Kincraig to the north, and Newtonmore to the south,[8] although the former has now closed.[9]

It is 71 miles 43 chains (115.1 km) from Perth,[10] located in Ruthven Road, Kingussie, about 200 yards south-east of the High Street. There are two platforms, both of conventional height. The Up line platform used to be at a slightly lower height, which was originally built to allow cattle to easily transfer to and from the wagons, and onto the adjacent market stance to the south of the station. This meant passengers had to be careful when alighting from a train as not all doors were given a portable step on the platform, and was not good for those with accessibility issues. In 2017, the platform was rebuilt to standard height. The station buildings are on the Down platform. A level crossing takes Ruthven Road over both tracks at the Inverness end of the station, with the local signal box at that end of the Up platform. The station is on the mainly single-track line from Inverness to Perth, and has a passing loop 33 chains (660 m) long, flanked by two platforms. Platform 1 on the down (northbound) line can accommodate trains having twelve coaches, whereas platform 2 on the up (southbound) line can hold thirteen.[10]

Kingussie High School is close to the station, as are also the Highland Council offices serving the Badenoch and Strathspey area.